Over the next few weeks I’ll be interspersing original content with certain older pieces I’ve written over the years. The following is a slightly edited version of one such piece, originally published on the 19 th October 2011.

NikNaks, is there a single South African who can claim not to have tried them at least once?

Manufactured by Simba, a South African company specialising in the latest in snack food technology, NikNaks are maize chips which come in a variety of flavours. These range from the original cheese flavour, to fruit chutney, cheese and sweet chilli, and spicy tomato. Simba has made the claim that NikNaks are the country’s biggest selling snack. A bold claim to be sure, but one which 96 out of 100 scientists believe to be accurate.

The remaining four scientists released the following statement when asked about the validity of Simba’s claim:

“There is no scientific basis on which these arguments can be proved. Some of the greatest minds in the world have thrown their weight behind this discussion and there is still no clear evidence to suggest that global warming is a threat to mankind. Wait, what was the question again?”

Simba has never revealed where the name for the snack came from.

Some believe the name derives from the Mayan word “Nikanaku”, which can either mean “crunchy goodness” or “unholy abomination”, depending on the inflection. The Mayans were the first to produce the snack, making it from a combination of mud, dry leaves and human tears. But it wasn’t until the New World was settled and corn became a staple food, that the recipe as we know it today was finally perfected.

In 1660 the snack was sent to Europe on large sailing vessels, packed in wooden crates to prevent them from getting wet during the long voyage. For two hundred years it was sold in secret, in seedy back alleys and dodgy inns where dark dealings could take place. This was because one of the ship’s captains, a Spanish man by the name of Antonio Felipe, had the inspired idea to combine the snack with a combination of cocaine and heroin, which he dubbed Le Sombra del Diablo, or The Devil’s Chip.

Others believe the name is derived from its usage in the famous children’s song “This Old Man”, which includes the line:

“With a knick-knack, paddy whack, give a dog a bone.”

We’ve all heard that line, but not many people know what the line actually means, or what its origins are. Well, lucky for all of us I have a PhD in literary history (from the University of Mind Your Fucking Business in Seattle), so allow me to explain:

The term “paddy whack” is derived from an old Irish saying.

A paddy is a type of shoe worn by gypsies and believed, in Irish folk lore, to contain ten gold pieces belonging to a leprechaun.

When a child got out of line his parents would whack him with a paddy, hence the term “paddy whack”.

An example of its usage can be found in the following sentence:

“Oy! Give me back me bleedin’ blarney stone or I’ll give ye a right old paddy whack upside yer noggin!”

Literary scholars have tried for centuries to trace the word’s usage in the above children’s song, but it was only relatively recently, in 1999, that Sir Thomas Cumberbatch uncovered documents believed to belong to Enid Blyton, which explained the origins of the famous line.

In the documents, what is assumed to be a young Blyton describes having an encounter in the forests of Alberta with a wolf of some kind. Blyton was seemingly eating a packet of NikNaks at the time and the wolf, drawn by the aromatic cheesy scent in the air, tracked her movements in an attempt to ambush her in a clearing.

Being on her own and a woman of very little substance, Blyton became alarmed and started to panic. As the wolf approached, its fangs bared and spittle flying every which way, Blyton looked around for an object to use as a makeshift weapon. At first she threw one of her NikNaks at the snarling beast but, being a chip, it simply bounced off the wolf’s fur and landed in the snow, where it promptly became soggy and turned the snow a bright orange colour. The wolf, undeterred and in fact quite insulted that Blyton thought a chip would be an adequate weapon, started snarling even harder and moved in close for the kill.

Blyton checked her pockets frantically and produced a Noddy doll that was given to her by the publishers of her first book, Noddy and the Kingdom of the Crystal Skull. She hurled the doll through the air and, because it was made in a Chinese sweat shop from the cheapest plastic available, it went straight over the wolf’s head and smacked into a tree (incidentally, this is how the phrase: “If you want the job to be right-on, don’t ask Blyton” was born).

The wolf was now almost upon her. Blyton was at her wit’s end. Being a children’s author, she tried using the greatest skill that the Lord God had provided unto her – her literary skills. “Once… upon a t-time…” she stammered. The wolf, not having an understanding of the English language, was not interested in her bedtime story and was about to pounce when Blyton suddenly remembered that she was wearing a pair of paddies given to her by a band of roaming gypsies that had passed through Old Clapham’s Common a fortnight past. She swiftly removed the left paddy and hurled it at the wolf. It landed on the wolf’s head with a loud THWACK! Of course, being naught but a simple shoe it also did little in the way of deterring the wolf, which leapt through the air and savaged poor Blyton until she was nothing more than pile of bones and entrails. After a while the wolf, sated and full, left the clearing where the grisly scene had taken place.

Sometime later it is believed a dog came by and picked up one of Blyton’s femur bones.

Hence the lyrics: “With a knick-knack, paddy whack, give a dog a bone.”

By now you’re probably wondering where this is going. Well, that makes two of us. I do, however, have an argument that I’d like to present. It’s something that has been bothering me for years.

“Oh Michael, how can a chip be racist? It’s only a food! It can’t reason or form opinions. Man is greater than chip.”

While you’d be right to think that, one need only look at the packets that NikNaks have come in since their introduction to South Africa in 1972 to see that I may be more close to the truth than you’d like to admit.

The NikNaks mascot has always been a man, dark in complexion, wearing a large hat, sunglasses and white lipstick. His lips are suspiciously large and he seems to either be a minstrel of some kind, or a child molester. 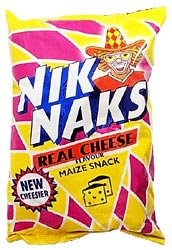 Now, perhaps Simba was intentionally trying to appeal to an African demographic, but I’m Jewish and if they decided to appeal to a Jewish demographic by having a man with a big nose and a rabbi’s hat on their OY-VEYN baked potato chips, I’d be pretty insulted.

Even as a child I would stare at the NikNak man and think, “Who is this guy? Why do I feel so dirty eating these? I feel like I need to take a shower. Also, why am I talking to myself?”

They’d probably have been better off saving money on a graphic artist and just putting this guy on the packet.

Perhaps Simba was giving us a clue as to how the chips were manufactured.

I’m talking, of course, about slavery.

I might be wrong on this (my lawyers advised me to add that line in so that I can’t be sued for libel), but I’m fairly certain Simba owns a large number of slaves and forces them to produce their snacks and beverages. In my head I picture their factory to look something like this.

Is slavery the means by which we have been enjoying our nation’s biggest selling snack food?

Did Steven Spielberg teach us nothing with Amistad and The Colour Purple?

Regardless of the slavery issue, one thing remains clear: those packets had to change.

And change them Simba did, as a few years back the NikNak man was redesigned to look less minstrel-like, and more non-racisty. The hat stayed, as did the shades, but gone were the uncomfortably large lips. 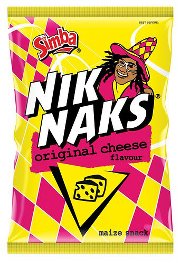 Better, but still a little suspect.

I mean, who was this new guy on my chip packet? You can’t just replace a mascot I’ve come to know and love with some guy wearing a similar hat. It’d be like McDonald’s replacing Ronald McDonald with Uncle Phil from The Fresh Prince of Bel-Air wearing a clown nose. How do I know I can trust this new guy to deliver the same great taste that the old, slightly-more-racist guy had going for him? 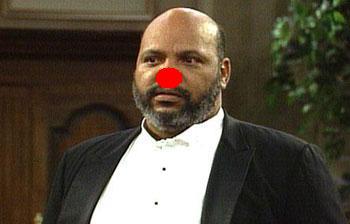 Anyway, I didn’t have to ask these questions for long, as no sooner had Simba replaced the mascot when they went and did it again!

I’m just going to go ahead and assume that Simba was inundated with phone calls and e-mails, mostly from Spike Lee, complaining about the suspicious choices made in designing a mascot for their chips.

You don’t see Ghost Pops having this sort of trouble, because their mascot’s a fucking ghost! If the ghost was brown and had massive lips with white lipstick, maybe you’d have a case, but no… it’s just a ghost. A white ghost. Where was I?

So the latest mascot is a bold deviation from the previous designs.

It’s an African man (I can say that confidently, because they’ve clearly coloured and designed him that way) wearing more trendy, urban clothing. The main difference is that his hat is no longer in the shape of a giant traffic cone and it looks like something that you’d buy from a shop on Long Street. In other words, it’s all very politically correct and above board. 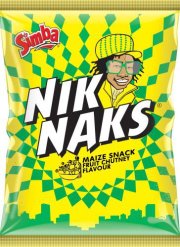 They even tried to explain the name of the chips by referring to their mascot as “Nik the Nak”.

What the fuck is a “Nak”, exactly?

You can’t just make up words! This isn’t Communist Russia!

According to internetslang.com, NAK is internet slang for “nursing at keyboard”. That doesn’t really fit with the whole chip thing, unless Simba are trying to bag the coveted breast feeding market.

More likely they just made up a word to try and take focus away from the fact that their mascot for like thirty years was a guy in BLACK FACE!

I think it’s terrific that Simba finally woke up to the fact that their mascot may have been more appropriate in Georgia circa 1751, but the damage has already been done.

Now if you’ll excuse me, I have to start writing a piece on the hidden Nazi messages in Beacon’s Jelly Tots. 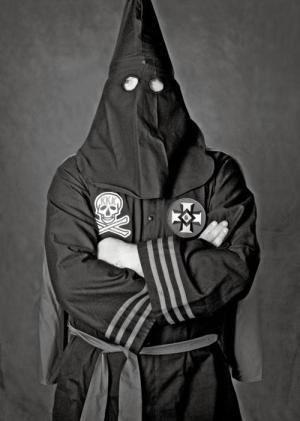 Jim Davidson, the creator of NikNaks

4 thoughts on “NikNaks – A History of Racism”