If the thought of living your life in a state of constant anxiety and dread as society teeters on the brink of imminent disaster sounds appealing to you, then may I suggest moving to Cape Town?

Located right at the bottom of Africa, the city of Cape Town is currently experiencing what experts are calling the worst draught since that Peroni I ordered at that bar two weeks ago. Thing wasn’t even cold! Wait, that’s not right. Drought. Cape Town is experiencing a drought. And it’s, like, really bad. I mean like Russell Crowe singing in Les Misérables bad. Remember in The Lion King, when Scar has taken over after killing Mufasa and the landscape becomes barren and charred and the sky turns a hellish red? It’s kind of like that. As of this writing, dam levels are sitting at just 26% and Capetonians (both a demonym used to identify residents of Cape Town, and a word used to describe people who enjoy wearing capes) have been urged to drastically reduce their water consumption. Households are allowed just 50 litres per person on a daily basis. 50 litres. That’s the same amount of eyeliner that Johnny Depp applies in his morning makeup routine. Failing to stick to this target will result in harsh penalties ranging from banishment, public flogging or – even worse – a strongly worded letter from Al Gore.

If that wasn’t enough excitement, the clock is slowly ticking down to the point where the city will be forced to turn off all the taps – a moment they are referring to as DAY ZERO. Think of it like Coke Zero, except instead of fewer calories in your beverage, you’re getting no beverage at all and eventual death by dehydration. Okay, that’s not entirely true. What’s actually going to happen is that the city will start rationing out water at 25 litres per person. What this means is that people are going to have to queue for water at designated collection points while the army stands by to make sure Clive Owen doesn’t appear and turn things into a live Children of Men recreation.

If that sounds like a good time well then you’re god damn right – it’s going to be the best. I can see it now: people working hand in hand to help their fellow citizens, children smiling in delight as the friendly government staff dole out water, shouts of joy as the first violator is stoned to death for taking more than his fair share. Ah, the memories we’ll share.

When faced with a crisis an anxious society will often panic and make impulsive decisions. I believe it was Dian Fossey who, after a six-month-long stint in the wild studying gorillas, said, “Humans are like gorillas. They love it when they have enough bananas to eat but take away their bananas for five minutes and BAM – they start throwing shit at each other.” I’m paraphrasing of course but I’m fairly certain that’s very close to what she said.

People have already started stockpiling bottled water and buying containers. Some might say this is prudent, best to be prepared. Others might say people are starting to panic and things will shortly devolve into chaos and anarchy. I went to a plastic warehouse on the weekend and it was like a scene out of The Walking Dead. People were getting into fights over Sippy cups. One guy threw a television set through a window. I swear I think I saw a tiger walking around at one point. I asked one of the staff members how long it had been like this and she responded by pulling out a .44 Magnum and shooting herself in the head.

Yes, things have gotten seriously bad in Cape Town. I was walking down Long Street the other night and instead of offering me crack, a drug dealer offered me a bottle of Bonaqua. 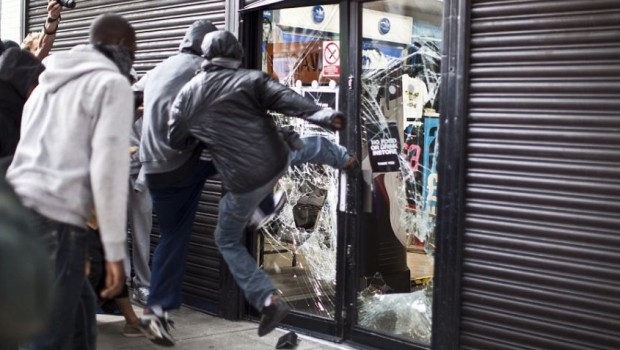 Looters kicking the door down at Mambo’s Plastic Warehouse

It’s not just plastic containers that people are after. The sale of JoJo tanks have also gone through the roof and they are already hard to come by. JoJo tanks, named after a famous circus monkey who performed in the Boswell Wilkie Circus in the late 80s and who died tragically in an accident involving a water tank and a unicycle, are large hollow storage tanks that are used to collect rain water, which can then be used to water plants and grass, or flush toilets and whatnot. Now I know what you’re thinking and no, you cannot fill a JoJo tank with chocolate milk and attach a giant straw. They’re strictly for water and this is serious so please get ahold of yourself.

So who is to blame? Some speculate that the national government – which does not run Cape Town – is deliberately stalling in declaring a state of emergency (which would allow for additional funds to be allocated that could help alleviate the problem) in a shrewd political move to try and demonstrate how useless the current local government is. Others would argue that while the water storage facilities have remained the same for decades, the population has continued to expand – thus ensuring that the current predicament was inevitable. Whatever the case my be, one thing is certain: the situation is bad and only by working together can we hope to come out of it without John Legend writing a sad song about us one day.

What do I think the next few months will look like? Hard to say. On the one hand, I’d like to believe that people will look out for each other – to realise that we’re all in this together and the only way forward is to change our relationship with water regardless of how we feel. On the other hand, it’s far more likely Cape Town will be transformed into a desolate wasteland where water has become a commodity far greater than gold, and where humanity has descended into a primitive state where survival is our primary instinct.

If you’ve seen Mad Max: Fury Road you have some idea where I’m going with this.

I mean think about it. You’ve got your barren desert where water is a precious commodity that is doled out by the “government”. You’ve got your band of marauding gangsters committing heinous acts of violence. You’ve got your terrible drivers causing chaos on the roads. Not to mention that Helen Zille, the Premier of the Western Cape province, is basically Immortan Joe.

Yes my friends it’s looking highly likely that we’re gonna go full-on Mad Max and I for one would like to make a suggestion that when that time comes we be more like Tom Hardy or Charlize Theron and less like this guy:

Which brings me to my next point.

When I started writing this I didn’t really know what the sum of all the parts would be, but I think I’ve figured it out. I don’t know much in this world (unless you count having memorised all the cheat codes for Warcraft II – sorry ladies, I’m already married) but I do know this: the best way to react in a crisis is to take a step back, breathe, and remain calm. It’s hard to stay level-headed when you’re bombarded every day with scary headlines, accusations of who is to blame, and threats of the possibility – however real it may be – of hard times to come. But being level-headed is what separates us from the beasts. In the meantime carry on living your life while doing your part to save as much water as possible. Yes, this situation is not necessarily your fault. Yes, it shouldn’t have come to this. Yes, a political game is being played on the backs of millions of lives. But getting angry, losing your cool, and buying every packet of wet wipes in the city so you can re-sell them at a ridiculous mark-up and crown yourself Supreme Chancellor of Wet Wipes is not the answer.

Now if you’ll excuse me, I have to go finish my game of Warcraft II.